This morning 20 meter European DX is rolling in like crazy but not a single station I call comes back to me.  It’s not the old test tone problem because pskreporter shows stations spotting me in Europe.  I can only conclude my antenna isn’t big enough.  What about a hex beam?  It would get out a lot better and still be a top hat for the low band vertical.  The seed of thought has been planted.  Maybe I could get some of this juicy DX to hear me.

Examine what was happening above a little deeper.  I heard a Czech station call CQ and I called back.  At the same time, another U.S. station was calling him, KD2EIP which we can see and apparently one we can’t see in Russia, RV3DBK.  The Czech heard the Russian and came back to him.  My signal was clobbered by a New York station and a Russian station.  A bigger antenna might not have made any difference.  Probably nothing I could do here could overpower two stations closer to the Czech Republic.  I have to learn to think of it as a DX pileup where finesse and operating skill are the best way to beat out big gun stations (for example, “tail ending”).  OK, back to the pileup. Hex beam is on hold for now.  JT65 has become so popular every day seems like a weekend contest.  It’s not like the early days when I once worked England with 100 mw.  Here’s another example from this morning. 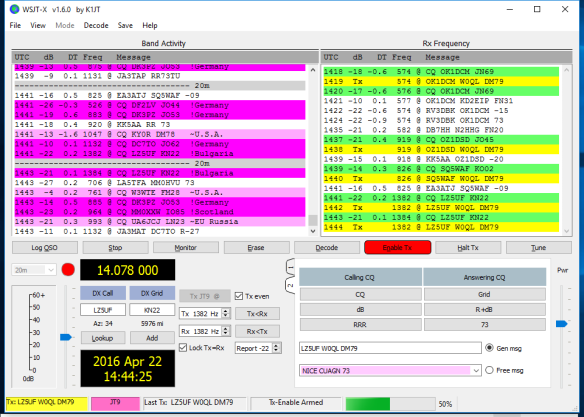