Nothing reinvigorates interest in operating a ham station more than an upgrade.  Finally some upgrades and changes are in progress.  (All we want is more, right?)

These upgrades and changes should make this station significantly more competitive.  Some of these upgrades are a culmination of what has been previously discussed in this blog. Others, like 630 meters, are a result of new happenings in the world of amateur radio.

Progress report on 40 meter dipoles:  South support pole is up and waiting for the north support pole to be readied.  South pole is in the foreground and the other pole is in the distance behind the shed. The pole is 65 feet tall.  Picture a dipole running between the tips of these two poles for 40 meters.

Update:  It blew down 3 days later.  What’s left of the aluminum is now a support for a 6 meter dipole for the sporadic E season.  It’s windy out there on them thar’ plains.

June 8, 2017:  Big progress on hole for tower.  Today we finished digging the 4’X4’X4′ hole and got a rebar cage built and lowered inside the excavation.  Next step is to put the tower base in.  My rotator cuff suffered minor damage and was quickly repaired by a little physical therapy.  My advice is next time get someone younger to do the digging. 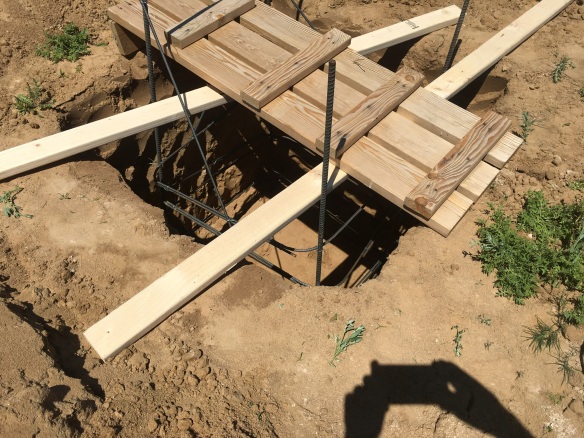