Joy came today when the first contact was made on 630m.  In fact five contacts were made on JT9.  On WSPR, spots were posted from all over the United States.

Last month a vertical antenna tuned up on 474 kHz.  The matching network had taken several tries but today it seemed to come together. The ground screen is made up of four radials, two 100 feet long and two 50 feet long rolls of welded wire fencing laid flat. The vertical radiator is 36 feet in height.  Two horizontal 50 ft wires connected to the top of the radiator make up  a “tee” top hat.  The loading coil enclosure and one of the radials look like this:

The matching network (loading coil) is inside the enclosure.  It consists of 100 turns of 16 gauge wire wound on a piece of plastic pipe.  The top of the coil connects to the vertical radiator and the bottom connects to the ground screen.  Upon close examination one can see a ferrite rod attached inside the coil form.  The rod is the secret to easy tuning.  By moving it up and down the resonant frequency can be dipped, a lot like tuning an i.f. transformer on a receiver. 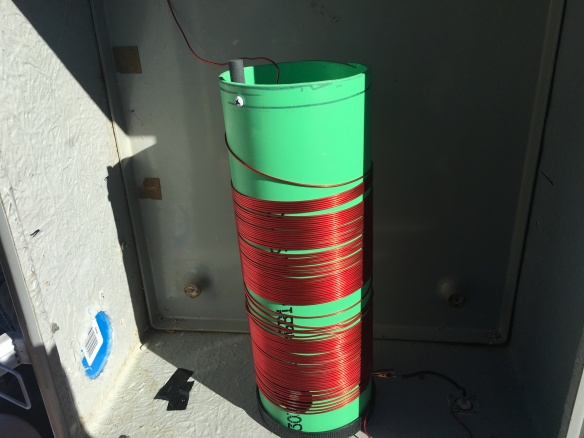 The coax is tapped onto the coil at the 50 ohm location.  Once it proves to be stable the clip will be removed and the wire soldered right to the coil. Holes in the coil form make it easy to clip onto the coil windings.

A snapshot of the antenna analyzer shows the resonant frequency and swr, both excellent at 474 kHz and 1.1.

Extrapolating from the above screen it can be seen that the 2:1 bandwidth is approximately 3.7 kHz.  The antenna is theoretically usable from 472.15 kHz to 475.85 kHz.   Extremely narrow bandwidth which could be problematic with shifts in temperature or wind.

Hitting the button to show the rest of the numbers reveals an almost perfect match of 53 ohms and almost zero reactance. 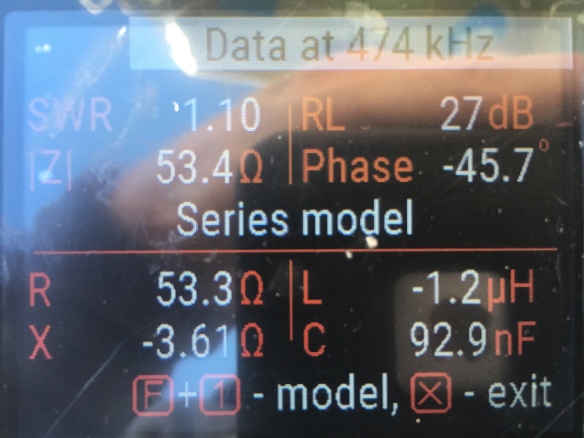 The antenna is ready to attach to a 630 meter transceiver.

Retuning on October 30 produced the following analyzer pattern:   (Very nice) Notice the new frequency of 475 kHz which is up one kilohertz from before.  The reasoning is when a 1 kHz tone is transmitted with the dial at 474.2 we are actually transmitting at 475.2.

Within the last few months information has been released on how to modify the Icom IC-7300 to transmit on 630 meters.  The IC-7300 already receives on 630 out of the box.  The “wide band transmit” modification consists of removing two surface mount diodes.  HRO will perform the mod at a charge of $40 and that is the method we chose.  This solution eliminates the need for a downconverter.  Output is 30 watts.

Stay tuned for the first tests.  See top of page.

The saga continues.  After a day of use the IC-7300 failed.  It refuses to put out power due to infinite swr activating the protection circuit.  At first a rig failure was suspected but swapping out the 7300 with a new one produced the exact same result.  A failure in the antenna was suspected.   Meanwhile, Googling the problem produced a possible explanation.  The IC-7300 was not designed to transmit on such a low frequency.  It has no low pass filters below it’s design frequencies therefore the output has harmonics.   The harmonics are reflecting back from the antenna and causing the swr meter to read high, which in turn triggers the protection circuit and shuts down the output.   Why did it work the first day before failing?   Hard to say.  Solution is to insert an external low pass filter.  A search is underway for one that can handle the 30 watts output of the IC-7300.  On the bright side neither the radio nor the antenna seems to be faulty.

The only filters that could be found are for qrp.  A higher power design was discovered at this web site:    http://njdtechnologies.net/630-meter-low-pass-filter-values-from-wa3etd/

Using junk box parts resulted in homebrewing a filter that could handle 30 watts and perhaps much more, shown below. The toroids are T200-2  powdered iron (red). The cores are wrapped with white Scotch fiberglass tape. The calculator available at the njd site above yielded 33 turns for this toroid.  One turn was removed after it was wound to obtain the 14.5 uH needed.  The capacitors are 1000V mica.

A possibility has been offered by Larry, K0NA:  We need a diplexer.  The harmonics which are filtered need someplace to go and this filter does not provide it.  Otherwise the harmonics are reflected back to the transmitter, much attenuated, but still are registering on the swr meter.  Inserting a diplexer would route the filtered harmonics to ground.  As long as the swr is below the protection cutoff level we won’t worry about it.

Meanwhile the antenna was upgraded by replacing the vertical wire with aluminum tubing.  It still has a 100 ft “tee” top wire horizontally even though it’s invisible in the picture. 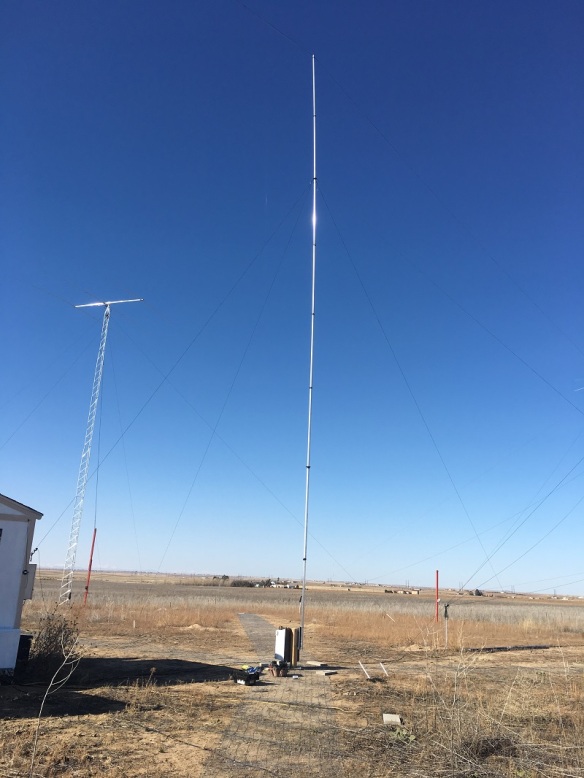 Interestingly, bandwidth has gone up to 66 kHz.  This will eliminate worries about mechanical changes shifting the resonance and producing an unusable swr.  Without retuning after adding the tubing the system resonants at 500kHz with a swr of 1.0:1 (note: if we added length the resonance should have gone down, not up).  Tuning the resonance down to 475 kHz does not result in the swr dipping to 1.0:1, however.  Why?  The swr at 10 watts output is 1.3:1 but at 25 watts out the swr jumps to 3.0:1.  Work remains to be done.

The coil has been stabilized with silicon caulk, the clip soldered for permanence, and a porcelain insulator has been installed for the antenna pass through.  Still up in the air on the next step to correct the swr. The basic question still looms; is it the antenna or is it the transceiver and the low pass filter?  Is this a faulty antenna or is the rig responding erratically on this non-standard band?

2019 Follow Up:  For the 2019 season the original downconverter was revisited using the IC-7300 for a 80 meter signal.  The downconverter puts out about 10 watts.  The antenna seems to be stable this season with no changes other than dipping it to resonance with the ferrite rod.